Inter Milan striker Romelu Lukaku had the opportunity to close the gap on Juventus talisman Cristiano Ronaldo in the race for the Golden Boot but was unable to take advantage. 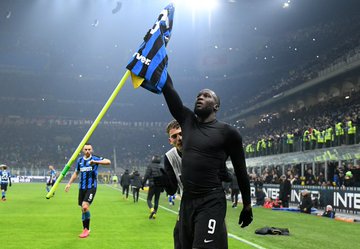 Belgian international Romelu Lukaku failed to score despite playing the entire duration of the match as his Inter Milan team played out a 1-1 draw away to Champions League football chasers Napoli at the weekend.

Ronaldo was injured for Juventus’ trip to face fellow Champions League chasers Atalanta and that opened the window of opportunity for Lukaku to close the four-goal gap between them in the race for who wins the Golden Boot Award at the end of the current Italian Serie A season.

In the race for the Golden Boot, Ronaldo has 25 goals, while Lukaku is on 21 goals. Romelu Lukaku could not score at the Stadio Armando Maradona in Naples as Inter Milan needed the equaliser from Danish playmaker Christian Eriksen to earn a point. Napoli had taken the lead in the first half through a Samir Handanovic own goal on 36 minutes. Ex-Spurs playmaker Eriksen scored ten minutes into the second half.

Inter Milan came into the Napoli game on the back of an 11-match winning run that took them 11 points clear of AC Milan in second place. Their Milan Derby rivals had cut that point deficit to eight points with the 2-1 win at home to Genoa. Inter Milan then moved nine points clear with the point earned at Napoli ahead of the final seven games of the season.

For Napoli, the point earned means they are two points adrift of Juventus in the fourth and final place for Champions League football. A win would have seen them move level with the Old Lady in the Champions League race.